“This book provides invaluable guidance for anyone who agrees no one should be left without hope. A must-read.”

A personal leadership guide Taking The Cape Off is for anyone struggling with Mental Health personally or professionally. This comprehensive handbook provides strategies, resources, and most of all hope for those who are struggling.

BUY NOW
Get a Free Chapter 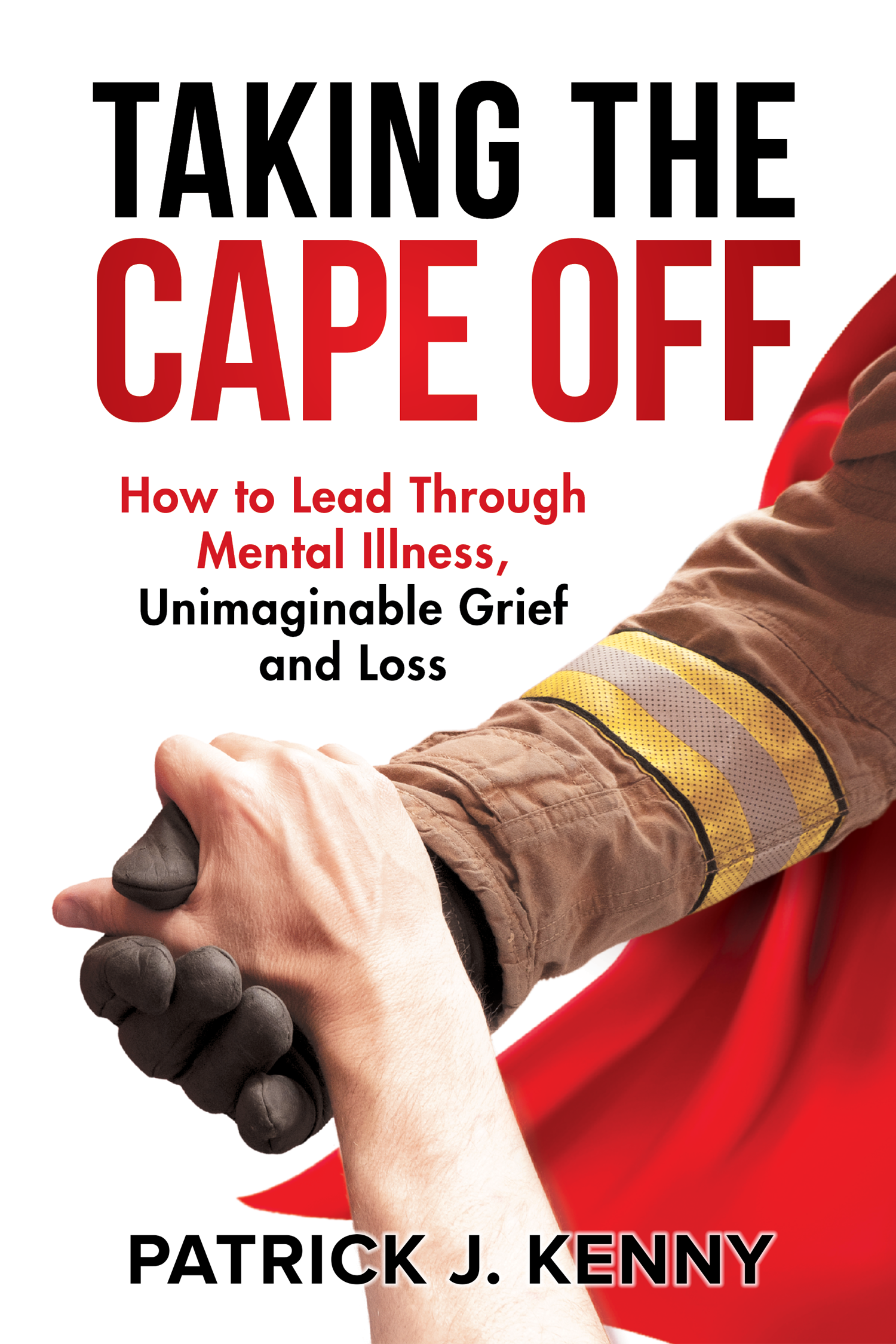 About Taking The Cape Off

Taking the Cape Off shares Fire Chief Pat Kenny’s journey to overcome his perceived failure as a leader in his most cherished duty, that of being a protector. His “Cape” failed to protect his 20-year-old son Sean from dying by suicide after a lifelong battle with mental illness. His anguish was complicated by his role as the leader of a fire department.

This is not a story of darkness but rather one of hope as he reveals the path he took to move forward with his life and return to a leadership role.

You will receive insight and guidance from the author’s personal experiences to help you understand and embrace the limitations of your leadership—your Cape—so that you can serve those suffering from mental illness, enhance your leadership, and enrich your life.

This comprehensive handbook is for leaders in any profession, for grief-stricken parents, and for anyone who struggles with the stigma of mental health. 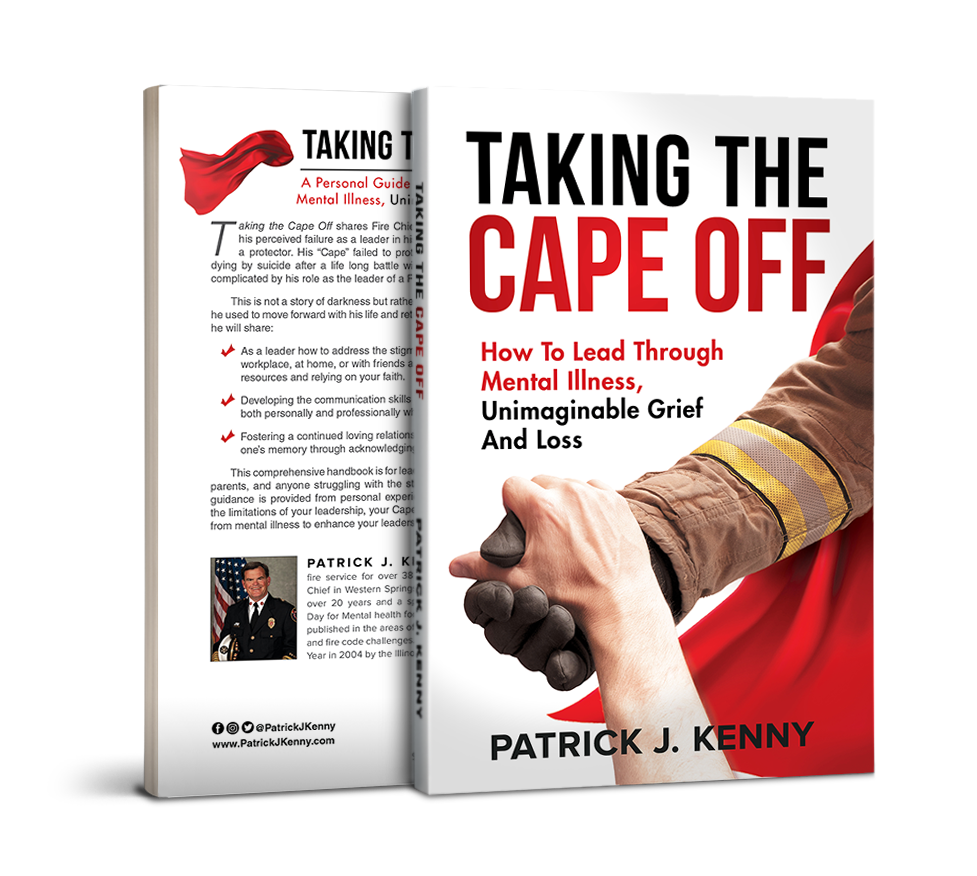 This is not a story of darkness but rather one of hope as Chief Pat Kenny reveals the path he took to move forward with his life and return to a leadership role after unimaginable grief and loss. In this book, he will share:

How you as a leader can address the stigma attached to mental illness in the workplace, at home, or with friends, utilizing professional resources and relying on your faith.

How you can develop the leadership communication skills necessary to help you both personally and professionally when faced with any health crisis.

Recognizing the Signs from Passed Loved Ones

How to foster a continuing, loving relationship with your deceased loved one’s memory by acknowledging the signs you receive from the hereafter.

Let me start by stating that there are numerous myths about mental health and suicide. You can Google it and come up with a list along with valid sources. I encourage you to do so if you are concerned about a co-worker, family member, or yourself. I am not a psychologist or psychiatrist and, as my mother said, my degree in psychology was a big waste of money as only dumb people run into burning buildings.

I can speak intelligently only to the myths I encountered with my son Sean. The reactions you see in the myths below were not always Sean’s reactions, but I can tell you that they are on target.

MYTH 1: Talking about suicide
with a person encourages the act.

Studies have shown that the first step in getting help is to admit that you’re feeling suicidal and express it. Someone who dies by suicide is not doing it because you have discussed the topic with him; he is doing it based on how he perceives life. Encourage open communication, not the opposite. By opening the door to a discussion, you are encouraging him to evaluate what he is considering and other options beyond suicide. Silence will never make things better. Our open communications with Sean, I believe, bought us a few extra years to be with him, not the opposite.

Anyone who goes so far as to use the word suicide is experiencing pain. Does it matter what degree of pain it is, whether it’s just a call for help or a signal to you that he wants to end his life? Can you live with yourself afterward if you blow it off instead of making sure that he gets help? I wouldn’t want to live with that. We never took Sean’s suicide talks as anything but real. By taking him seriously, one thing we didn’t have to live with after he passed was guilt that we didn’t believe his pain.

Mental illness is the same as any other physical illness. Do we ever say that people who are diabetic are not very smart? No! So why do we do that to people who have a mental illness? Those who have mental illness come in all sizes and shapes and levels of intelligence, just like the rest of us, and they should be treated with the same respect. For the record, Sean was a B student; even during his hospitalizations, he kept up his studies. He could go toe-to-toe with any psychologist after his extensive reading on the newest medications and intervention theories. Don’t sell your folks at work or at home short.

Frequently after I give my “Sean’s” talk, I can see the look of dread on the faces of parents who have a child suffering from mental health challenges. Naturally, they worry that their child is destined to end up like Sean. We see that certain disorders can run in families. My grandfather killed himself, I almost killed myself, and then Sean killed himself. Even so, there is no direct evidence that an act as drastic as suicide is a foregone conclusion. As you would with any other physical illness, it is wise to keep your radar up if mental health illnesses are part of your family history.

People with mental health problems can
snap out of it if they try hard enough.
Mental illness is not a decision or a sign of weakness as the stigma suggests; it is a physical illness. Just as people do not choose to get pancreatic cancer, no one chooses to suffer from bipolar disorder, for example, and you can’t just “snap out of it” one day.

It is vital to realize that cancer and mental illness are physical malfunctions and need to be treated the same way: seek professional help and medication and learn to cope with the illness. Sean was one of the strongest people I have ever known. He endured fifteen years of pain, and he survived until he was twenty years old because of his inner strength.

In this comprehensive handbook Taking The Cape Off you will receive insight and guidance from the author’s personal experiences to help you understand and embrace the limitations of your leadership—your Cape—so that you can serve those suffering from mental illness, enhance your leadership, and enrich your life.

"This book provides invaluable guidance for anyone who agrees no one should be left without hope. A must-read."

"Powerful comparison of a true-life experiences delivering a heartwarming message pertaining to the realization mental illness is in fact a physical illness even though it can't be visualized like other diseases."

"Chief Kenny’s words are simple and true – Have Faith and Trust in you, and its ok to take off “the cape” or if the cape needs some repair." 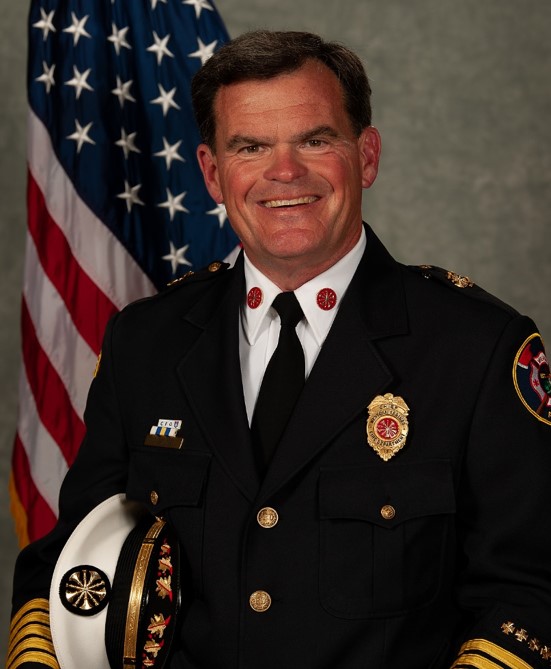 PATRICK J. KENNY has been a member of the fire service for 38 years, a chief officer for over 20 years, and currently serves as the Fire Chief in Western Springs, Illinois.

A popular speaker, he has presented throughout the US and in multiple countries on Mayday for Mental Health for more than a decade. He has written articles on mental health, leadership, fire safety, and fire code challenges.

For Anyone Struggling with Mental Health Personally or Professionally

A personal leadership guide providing strategies, resources, and most of all hope for those who are struggling with mental health.