“On behalf of the Illinois Fire Chiefs Association Executive Board, congratulations on this Honorary Award.” 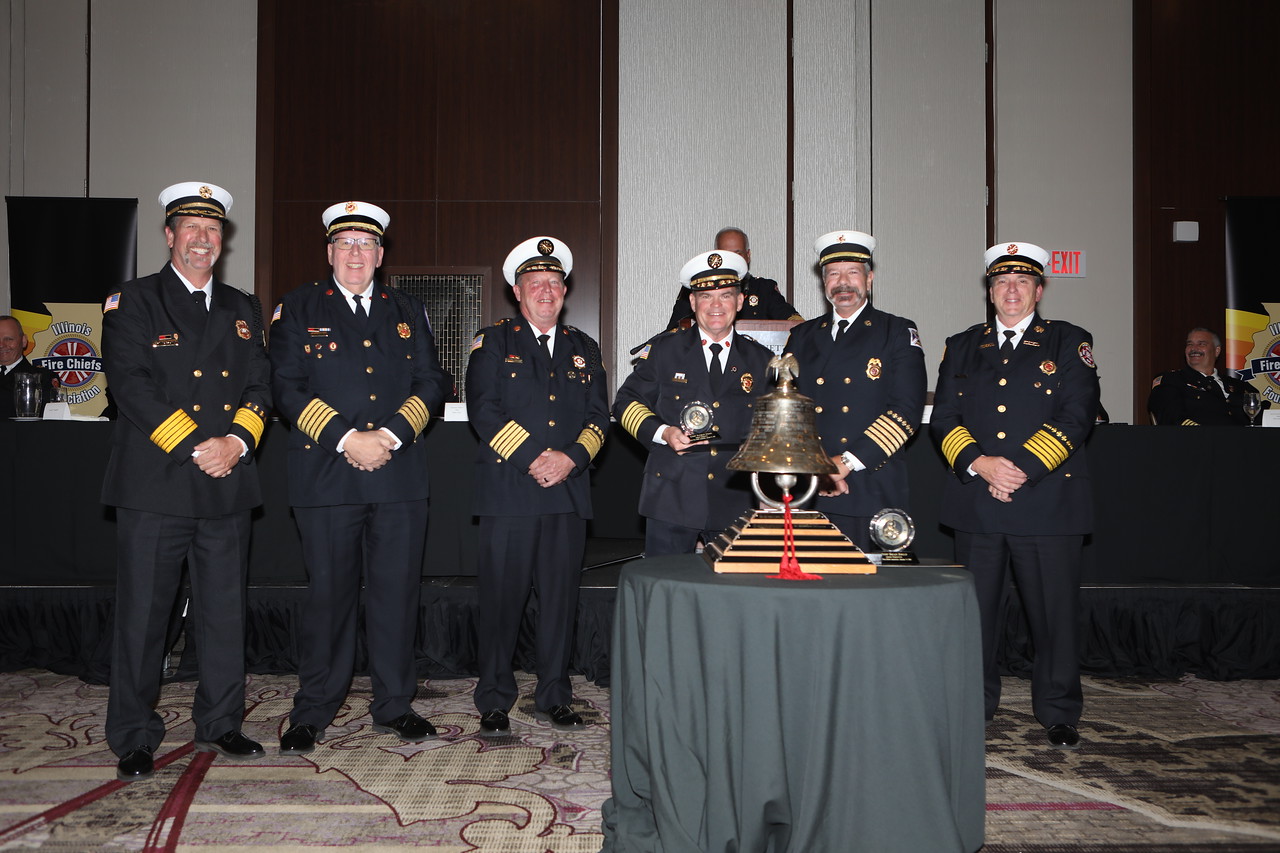 Patrick Kenny accomplishments were recognized by way of a presentation at the Illinois Fire Chiefs Association Conference held in Peoria on October 18-21, 2021. The presentation was done during the Presidents dinner on Tuesday, October 19th, at the Pere Marriott Pere Marquette Hotel.

From the Award Presentation:

Chief Patrick Kenny has been in the fire service since 1982, during which time he has served on three separate departments, rising through the ranks serving as Chief on two of them, retiring in January of this year.

During the course of his career, Chief Kenny has been recognized in providing structure and professionalism to his departments and improving the level of fire safety in the communities he served. His passion and dedication to the well-being of firefighters stands out as a crest on his chest. As such, he is known to many as a friend and mentor and inspires individuals to excel. He leads by example and trains to make sure anyone under his supervision is ready to meet any challenge – he gives his personnel the best opportunity to succeed. But he has always made sure that the spouses and children were always just as important.

Chief Kenny is a graduate of the National Fire Academy Executive Fire Officer, Chief Officer Designation by Center for Public Safety Excellence, holds numerous OSFM certifications, an Associate’s Degree in Fire Science, a Bachelor’s Degree in Psychology, But his passion and expertise on Mental Health has him traveling across the U.S., Canada, and England speaking at numerous fire service organizations, associations, and conferences. His toughness and resiliency in the face of multiple tragedies in his own life that would break most individuals has served to fuel his motivation to serve others. He is effecting constructive change on how to best lead through the toughest of times and how to really approach mental issues both professionally and personally. He has authored several articles on mental health in the fire service that have been published in numerous trade journals and authored a book in 2020 titled “Taking The Cape Off”.

He has served on the IFCA Executive Board in various capacities to include President, and Assistant Executive Director, served as a Director for the Metro Chiefs, President of DuPage Fire Chiefs, and President MABAS Division 10. He served as an Instructor for the IFCA, the Illinois Fire Inspector’s, Northwestern University, IFSI, and NIPSTA. In 2004, he was named Illinois Fire Chief of the Year by the IFCA. Earlier this year at FDIC in Indianapolis, he was presented with the George D. Post Instructor of the Year by Fire Engineering & the International Society of Fire Service Instructors.

In his spare time, Chief Kenny serves on the Rosecrance Florian Program as an Advisory Committee Member, served on the Illinois Firefighter Peer Suppport Team, a Member of the Chicago 100 Club, a Member of the Loyal Order of the Moose, and is a Volunteer Baseball Coach for Downers Grove South High School.

A few excerpts from nomination letters and there was a theme here;

and finally “his care and concern for others as well as their families came first in every decision that he ever made”.

It is with great honor and respect we awarded Fire Chief Emeritus status to Chief Patrick Kenny of the Western Springs Fire Department.

Learn more about the history of the award here