The Readers’ Favorite International Book Award Contest featured thousands of contestants from over a dozen countries, ranging from new independent authors to NYT best-sellers and celebrities.

Readers’ Favorite is one of the largest book review and award contest sites on the Internet. They have earned the respect of renowned publishers like Random House, Simon & Schuster, and Harper Collins, and have received the “Best Websites for Authors” and “Honoring Excellence” awards from the Association of Independent Authors. They are also fully accredited by the BBB (A+ rating), which is a rarity among Book Review and Book Award Contest companies.

We receive thousands of entries from all over the world. Because of these large submission numbers, we are able to break down our contest into 140+ genres, and each genre is judged separately, ensuring that books only compete against books of their same genre for a fairer and more accurate competition. We receive submissions from independent authors, small publishers, and publishing giants such as Random House, HarperCollins and Simon & Schuster, with contestants that range from the first-time, self-published author to New York Times bestsellers like J.A. Jance, James Rollins, and #1 best-selling author Daniel Silva, as well as celebrity authors like Jim Carrey (Bruce Almighty), Henry Winkler (Happy Days), and Eriq La Salle (E.R., Coming to America). 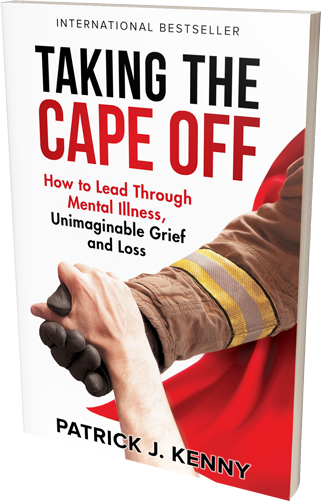 “When the right books are picked as winners we pay attention. We will be spreading the word about Readers’ Favorite.” –Karen A., Editor for Penguin Random House

Readers’ Favorite is proud to announce that “Taking The Cape Off” by Patrick J. Kenny won the Gold Medal in the Non-Fiction – Grief/Hardship category.

You can learn more about Patrick J. Kenny and “Taking The Cape Off” at Readers’ Favorite where you can read reviews and the author’s biography, as well as connect with the author directly or through their website and social media pages.