Taking the Cape Off hits #1 on the Amazon Best Seller Lists on International Stores.

Taking the Cape Off: How to Lead Through Mental Illness, Unimaginable Grief and Loss hit the #1 position on the Amazon.com Best Seller List on November 21st, 2020. The book also reached the #1 position on international Amazon stores, including USA, Canada and Australia. 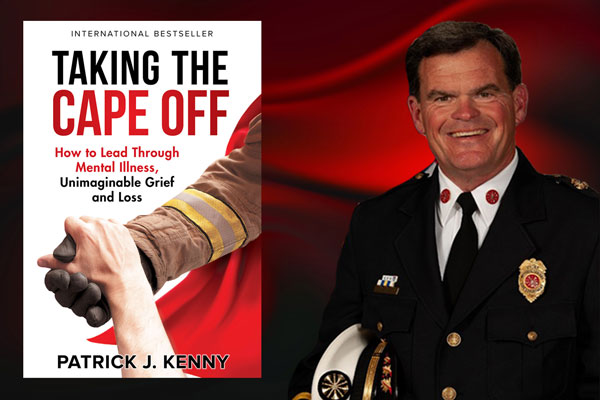 Taking the Cape Off: How to Lead Through Mental Illness, Unimaginable Grief and Loss shares Fire Chief Pat Kenny’s journey to overcome his perceived failure as a leader in his most cherished duty, that of being a protector. He explains how his “Cape” failed to protect his 20-year-old son Sean from dying by suicide after a lifelong battle with mental illness. His anguish was complicated by his role as the leader of a fire department.

PATRICK J. KENNY has been a member of the fire service for 38 years, a chief officer for over 20 years, and currently serves as the Fire Chief in Western Springs, Illinois. He has presented throughout the US and in multiple countries on “Mayday for Mental Health” for more than a decade. He has written articles on mental health, leadership, fire safety, and fire code challenges. In 2004, he was awarded Fire Chief of the Year by the Illinois Fire Chiefs Association, and in 2020, he was awarded the George D. Post Instructor of the Year by the Fire Engineering/International Society of Fire Service Instructors (ISFSI).

When asked about the daunting endeavor or writing about his family’s story, Chief Kenny said, “When I saw the stigma of mental illness put on so many good people, when I saw them judged as weak, not ill, I thought of my son Sean. Having witnessed his courage and his fight for fifteen years, there was no way I could quit. I didn’t want to let him and his mom down.”

Taking the Cape Off: How to Lead Through Mental Illness, Unimaginable Grief and Loss is now available on Amazon, in both Kindle and paperback format.

To learn more about Taking the Cape Off please visit www.patrickjkenny.com